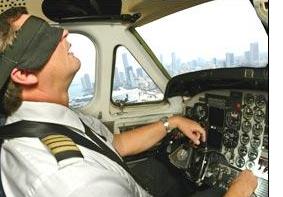 Last week an Air Traffic Controller admitted falling asleep during his shift. Of course this incident was widely reported in the media. That it would receive such coverage is a given. However, it’s the implications for fearful flyers and the general public that concern me.

The role of the tower controller is to control air traffic inside the “airport traffic area”—usually a radius of about 5 miles. The job includes controlling (directing) airplanes moving to and from the runways on the airport surface as well as airplanes taking off and landing. During peak periods at busy airports, this is a demanding and important task.

The Story Behind the Air Traffic Controller Story

In the case of the controller at Washington, DC’s Reagan National Airport, the incident took place sometime after midnight. Two airliners being sequenced for landing were unable to contact the tower controller when directed to do so by the radar approach controller. The radar approach controller controls an area roughly 35-40 miles in diameter surrounding the airport and maintains watch over airplanes taking off and landing at Reagan. The radar controller has functional control outside the airport traffic area and maintains a watch on the radar even while the airplanes are under tower control.

The media coverage implied that because the “handoff” from the radar controller to the tower controller could not be effected, “security layers were compromised.” Adding to the supposed security threat was the close proximity of the White House, Congress and other sensitive government buildings “because there was no clearance from the tower.”

In reality, landing clearance from the tower controller is important but has little relevance to “layers of security” under these circumstances. Because the radar controller is watching a landing aircraft, primary responsibility for observing an aircraft’s flight path resides with him.

Landing at a tower-controlled airport without the tower controller’s clearance is a violation of procedure but not necessarily a serious threat to safety. And in this case, it occurred at a time when there was no other traffic, other than the two late-arriving aircraft, to put anyone at significant risk.

There are airports where airline operations are conducted that have NO tower controller and often NO radar controller. There are established procedures for operating at such airports. Not only that, but some tower-controlled airports cease operations late at night, and the airport reverts to so-called uncontrolled airport operations even though there might still be tower personnel present after their shift.

What the two commercial airlines did during the incident in question was to operate as if the airport was “uncontrolled,” and they landed safely without incident. Landing without talking to the tower controller doesn’t happen only because he/she fell asleep. Circumstances sometimes result in a failure of the arriving aircraft to get on the tower frequency by the time it lands. Sometimes it’s due to the radar controller being very busy handling traffic, and he/she forgets to direct the landing airplane to switch frequencies. And if the crew was busy monitoring the flight instruments due to a low visibility landing, they might fail to realize that they didn’t receive instructions to switch frequencies. In either case it can result in the airplane landing without getting a specific clearance to land. It’s not ideal but it doesn’t mean that there was automatically a serious threat because the radar controller had been watching the aircraft and sequenced it properly for landing. At the same time, the tower controller was anticipating the aircraft because he was in verbal contact with the radar controller facilitating the handoff, often watching the landing airplane on his own radar display.

The Aftermath of the Incident at Reagan National Airport

Taken in context, my concern with this incident is that too much emphasis will be placed on WHAT happened and WHO was at fault. It’s not that I don’t think that this is important, but in the scheme of things the most important issue is WHY this happened. You don’t have to be an air traffic controller to know that working late at night and in the early morning hours ALONE during times of little activity while trying to stay alert can be challenging. Add to that scenario the potential added fatigue of this being the fourth consecutive overnight shift.

The fact that the Secretary of Transportation IMMEDIATELY ordered two controllers to be required for future overnight shifts at Reagan National Airport speaks volumes. On top of that, he’s ordered the FAA to examine staffing levels at other U.S. airports.

The issue really seems to have human factor implications, that is, causes based in limitations on human performance. And we hope that the agencies responsible for investigating this controller’s “lapse” won’t fall victim to their own lapse by not focusing on any underlying causes that may be the real culprit.

The Take-Away for Fearful Flyers

One implication from this incident for fearful flyers is to be careful when absorbing media reports. It is the job of the media to report newsworthy events. But the reality is that all things “airplane” tend to get priority coverage. That’s understandable because accidents and incidents involving aviation tend to be more interesting to the public due to its rare but usually dramatic occurrence. Ironically this tendency toward greater scrutiny contributes to making commercial aviation the safest way to travel on the planet.

Just remember to limit the attention you give to aviation accidents and incidents and stay connected to outlets like www.FearlessFlight.com for more complete information and a context for understanding events.