Where did all the airplanes go? 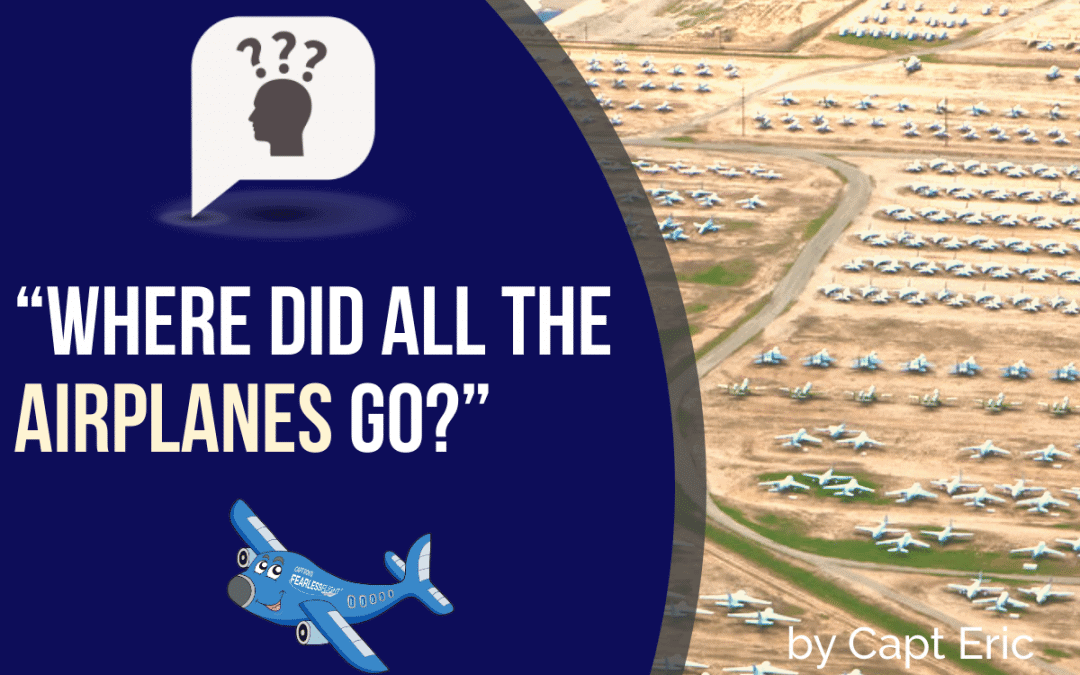 Captain Eric Larsen (ret) here, talking up some (post-)Covid-19 commercial aviation issues and news. If you are new to my blog column, you may not know that every Tuesday at 6:30pm Pacific, my friends Capt Ron, Dieter, and I have been talking about some of the airline news and changes in commercial aviation since the beginning of this pandemic on our weekly FearlessFlight® LIVE Show.

Have you ever wondered what happened to the roughly 6,000+ airplanes that are currently not flying?

How do the airlines make sure that the planes are airworthy again after weeks and months in storage?

Take a look at this graphic from Bloomberg which illustrates what I mean, especially when we compare what’s going on right now to 9/11: To say that the coronavirus pandemic has devastated the travel and specifically the airline industry, is an understatement.

Just for us here in the U.S. air travel has dropped a whopping 95% compared to last year and the number of flights scheduled globally is down by 63%, according to data from Cirium.

More than 16,000 of the world’s commercial aircraft were grounded at the height of the pandemic.

As it is, these planes cannot just sit idle, they need routine maintenance and a place to be stored. And when you suddenly have thousands of planes with nowhere to go it becomes a logistical nightmare.

Where did all the planes go?

Longer and much more interesting answer:

One of the things that has fascinated me the most is/are the pictures of thousands of the U. S. airlines’ as well as the rest of the world’s major airlines planes parked in tight formation for miles on end at long term storage facilities across the country and world. Some of these facilities are located south and west of Phoenix in the Sonoran Desert and northeast of Los Angles in the Mojave Desert. These facilities are ideal for long term storage due to the relatively benign weather and very low humidity.

Another feature of the desert is what lies slightly below the surface of the terrain, caliche.

Caliche (learn more on Wikipedia) is nearly impenetrable by water so that aircraft weighing hundreds of thousands of pounds can be rolled off of the pavement and parked without constructing a concrete pad.

This is the same reason that when you want to put in a swimming pool in Phoenix, the contractor comes to your house, takes one scoop in the yard with an end loader, stops and tells you, ‘hard dig.’ This causes your pool installation quote to increase substantially. Many of the storage airports are old WWII training fields or bases or old USAF bases.  They are also great locations for movie aviation action shots/scenes, although that might be a slightly problematic now with hundreds of airplanes parked up and down the runways. Hollywood has its own issues and we won’t get into them here. Nevertheless, parked they are, and at one point, over 50% of the entire globe’s airline fleet parked, it makes for another stunning Coronavirus reality and some incredible pictures.

I always picture one desert hermit kind of guy sitting in a small wooden shed supervising his idle flock of beautiful and symmetrically parked airliners. The hermit in question is obviously quite capable of entertaining himself, internet or no internet.

The slippery slope from storage to boneyard

The colloquial name of these airplane parking lots is ‘boneyard.’

Boneyard is a bit of a misnomer and a harsh way to think about it especially for the pilots and crew that operated those aircraft. It is a fascinating topic however as evidenced by Airplanesboneyards.com, which is a website dedicated to reporting about the various locations and facilities engaged in the storage, reclamation and disassembly of aircraft.

I once had an opportunity to fly a company aircraft to Roswell, Nm (ROW) from Phoenix on a ‘one-way trip’… and I’m glad I never did it. I’m sort of an old softie that way. ROW is one of American Airlines preferred parking lots. Lots of Martians running around ROW, anyway.  😉

Bad neighborhood. In fact, there isn’t really a hermit in a shed but a large crew of highly specialized mechanics that will handle the airplane. One of the first things they will do is drain fuel, oil, and hydraulic lines and coat them internally with a light oil used to preserve the lines.

Next, they must TIGHTLY seal all engine intakes and exhausts, landing gear openings, and all other ports or valves that allow outside air intake or exhaust to prevent local wildlife from finding a fabulous new home. Now the airplane will be parked for an indeterminate amount of time.

.. ​While the airplane is parked the onsite mechanics will do occasional checks. The airframe will be inspected for corrosion, electrical systems will be powered up, hydraulically powered control surfaces will be actuated and moved every few months, and additionally the aircraft itself will be rolled slightly to prevent flat spots from forming on the tires.

For even more geeky information on how the engines are protected, etc., take a look at this Airline Geeks article.

When the aircraft is parked at one of the airline’s hub airports for storage the airlines’ company mechanics will perform these functions. If the aircraft owner thinks it will come retrieve the aircraft in the foreseeable future, it may sit ‘as is.’ The same mechanics that parked the airplane can pull it out and reverse the process and have it ready to go in about a week’s time.

If the length of storage will be longer, the airplane may be painted over with special coats of paint to further reduce as much as possible the effects of the sun on the aircraft skin.

The airline itself may come scavenge radios (avionics), engines, or other parts it wants to support its operating fleets. Or some of these components in the airplane may be leased from the manufacturer or another party and they may come get them.

Ultimately, if the airplane will never return to service, some facilities are set up to dismantle them and recycle the parts on site. A few of these facilities are open to the public and would make for a fascinating tour. Most are not but are generally visible from the perimeter somewhere and make for a stunning sight.

One of the things I also never did was to retrieve an aircraft from one of these facilities. That would have been a happy occasion.

I would love to have said, ‘I’ll take the middle 767 parked in the middle row. Or the one next to it would be ok too.’

That probably would have been a bad idea. As I mentioned with few exceptions these facilities are located out in the middle of nowhere and it would be easy for the onsite crew to permanently ‘misplace’ an annoying nerd company maintenance pilot.

As we reviewed above, the storage/retrieval process is fairly complex. I myself have been waiting at the airport for an aircraft scheduled to be returned from long term parking. I was told everything from “it will be here soon”, “it will be here later”, “we hope it will be here tomorrow”. And finally, “Never mind, why don’t you head home, and we will call you when it shows up?”