DFW TSA GETS A CLUE TO CUSTOMER SERVICE 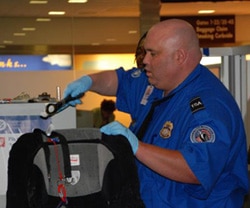 I recall taking an uncle to Chicago’s O’Hare airport in 1959 as he was leaving for basic training having joined the Navy. We parked the car in the O’Hare parking lot, walked into the terminal and all the way to the gate without seeing as much as a single police officer. Hard as it is to believe, airport security and screening wasn’t on anyone’s radar in those days. The first hijacking occurred in 1961 but it wasn’t until 1969 when the first security screening was placed into effect by Eastern Airlines due to the rising number of hijackers who wanted to go to Cuba.

While I totally support the Department of Homeland Security and the TSA and their efforts to provide the first line of defense to discourage terrorists, it always bothers me to see the brusk, sometimes almost absurd tactics employed at some TSA posts. Well, a combined effort at the DFW airport has resulted in some near human touches to a sore spot with many flight crews and passengers.

At some checkpoints, the Security screening area looks more like a hotel lobby instead of a security checkpoint. In fact, Springhill Suites, a hotel chain, sponsors one of the screening areas. They’ve put up overhead monitors to provide passengers the anticipated wait and posters indicating what items they will have to part with before going through — a welcome respite to my favorite: the screaming TSA officer practicing his/her drill sergeant skills in a robotic way. And on the other side, there is a homey couch to put your shoes back on and reorganize your items.

Hopefully this will spread throughout the nation. To read the article in it’s entirety, go to
SECURITY UPGRADES article.