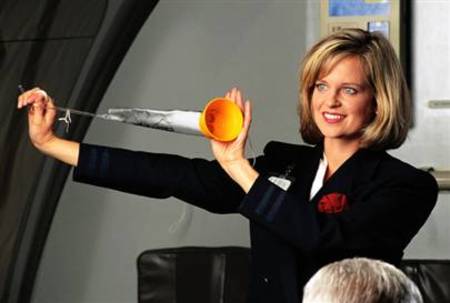 Yahoo travel has a great article written by an anonymous flight attendant on “Seven Ways to Annoy a Flight Attendant.”  Carry-on complaints were big:  carrying on luggage you can’t lift and ignoring the flight attendant’s request to put your stuff underneath the seat in front of you.  Obviously, flight attendants aren’t weight lifters. Their prime responsibility is passenger safety.

Not one of the seven tips has to do with fear of flying.  Flight attendants can and will help you with your heavy fear of flying baggage that you’ll be carrying onto the flight.  Try saying something like this the next time you fly: “Just wanted you to know that I’m a fearful flyer, so I’d appreciate any extra attention during the flight.”

This FYI announcement is helpful for both you and the flight attendant.  Many fearful flyers are afraid of “freaking out” during the flight and making a scene that would require the attention of the flight crew.  By making your fear of flying known up front, it will help them to help you.  Really.

Try it on your next flight and then let us know what happens.