Hudson Flight and Fear of Flying 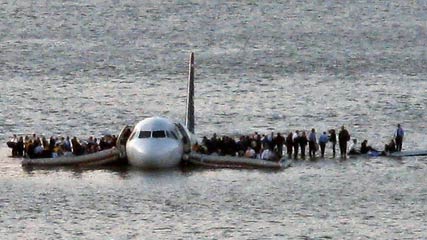 The show Inside Edition asked for people to call in and report whether or not the miracle flight of US Airways yesterday made them reluctant to fly.  While some of the US Airways plane still sits in the Hudson River, I’m happy to report that fearful flyers I’ve talked to today are reporting that they are no longer “sitting” in their fear of flying.

Keep in mind that the people I’ve spoken with are all people currently working with Fearless Flight.com to overcome their fear of flying.  They’ve taken steps.  They’ve done the work.  They’ve been willing to make some changes.  And it truly shows.

Maria told me how amazed she was that she didn’t “freak out” when she heard about the accident.  She said, “It doesn’t make me more scared.  It gives me more confidence.  Planes can float.  People can get off.”  I told her that I was impressed with her new attitude about flying.  She thanked me and commented, “I am changed.”

Craig sent me an email in which he said:  “Usually this would have freaked me out, but I am getting better about flying. Also this proves that a lot can go wrong, and a plane can be OK. “  Everyone gives all the credit to the pilot, and Craig is no exception.  He said, “People can see from this how amazing most pilots are. No amateur is flying a commercial jet!”  So true, Craig!

Reggie commented in her email that  she doesn’t allow herself to dwell on the news about the accident.  Fearful flyers like to dwell on crash details, so in our live Cleared for Takeoff classes Capt. Ron says, ”STOP WATCHING!”   Reggie took this advice to heart:  “I took what little news time I chose to expose myself to, regarding the US Air incident… with a degree of comfort knowing I had a tad more knowledge than ever before thanks to your CLEARED FOR TAKE-OFF Program, that I had recently attended, at Sky Harbor Airport.”

Joanna is also following Capt. Ron’s advice about exposing herself to news coverage.  She said, “I wanted to watch the coverage enough to find out what the likely cause was, if anyone was hurt and that was about it. I’m washing my hands of it cuz I gotta fly in a couple of weeks!!”

The Today show also addressed how the miracle flight may have affected people with a fear of flying.  Dr. Gail Saltz gave some tips for people whose fear of flying was adversely affected by the Miracle on the Hudson flight, even if it was a successful outcome.  She also discussed the posttraumatic stress that some passengers may experience.

I don’t know what the results will be of the survey conducted by Inside Edition, but I can report that the people who are working with Capt. Ron at Fearless Flight.com are making great progress overcoming their flying fear.  Bit by bit, it CAN be done!